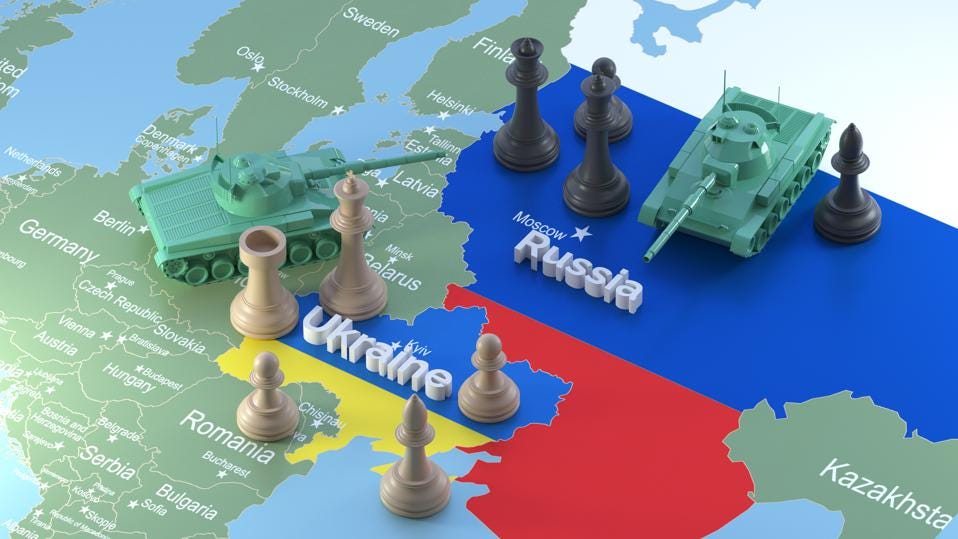 The first quarter of 2022 is in the books. It was a volatile quarter, and its outcome differs depending on which benchmark you use as your reference point. Nonetheless, the primary themes that drove market returns were the Russia-Ukraine military conflict, that spiked commodities, the cycle's first rate hike, and stubbornly high inflation.

The unfortunate and unnecessary events unfolding in Ukraine had the market on edge. As we have discussed in past newsletters and our 2022 outlook webinar, the market's initial reaction to military conflict is always to sell first and ask questions later. However, after a few weeks, buyers tend to step in as market participants gain a clearer understanding of the risks involved.

Early on, our concern was that the conflict could spill over into other regions and potentially increase tension between Russia and NATO. This risk has diminished as the war enters its second month, and Putin's hopes for a quick win are clearly off the table.

The conflict now appears to fall into "normal" historical reference points, and as such, we believe markets have discounted the ongoing conflict and history that can repeat itself. 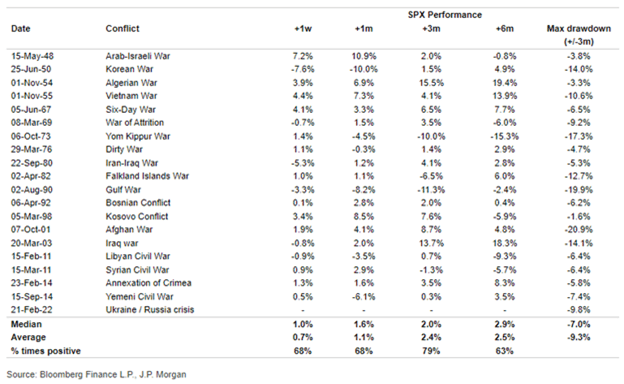 Bottom Line: We believe the military conflict will not broaden, allowing market participants to access the risks to the outlook. Further, a resolution would eliminate any remaining risk premium built into commodities and asset prices.

Commodities were experiencing upward pressure even before the Russia-Ukraine war due to rising demand and limited supply depending on the commodity. Key to the global economy is energy, as oil and natural gas are vital inputs, either directly or indirectly, in almost every consumer good.

The rapid run of WTI oil from US$62.43/bbl to US$130.50/bbl from December to March was concerning, given what we know about oil supply shocks. The late stage of this run in spot oil prices was primarily driven by major oil consumers such as Europe, US and Japan to reject Russian oil in response to their attack on Ukraine.

The good news is that the US economy is in a position of strength to deal with higher energy prices. To negatively impact economic activity, oil would need to push materially higher in the US$150-200/bbl range.

As illustrated below, US energy consumption as a percentage of total consumer spending is not flashing a warning sign.

US Energy Consumption as a Share of Total Consumer Spending 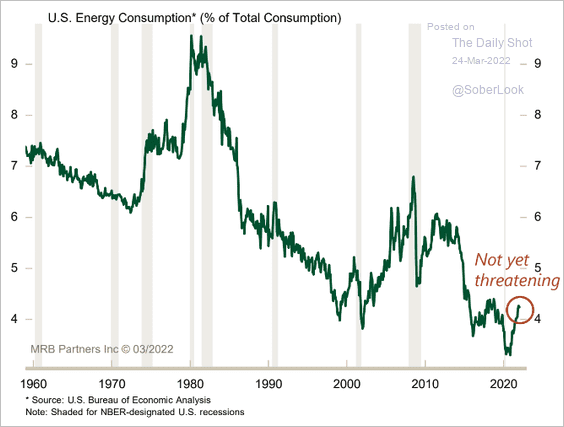 While we cannot predict the end of the military conflict, we can predict that a resolution would remove much of the risk premium built into energy prices. We could foresee a return to US$80/bbl, a level the futures market suggests, providing a very nice tailwind for the economy as we head into summer driving season.

Price-taking commodity-centric sectors are inherently volatile and often mean-reverting. We often say they are a sector you "rent and not own," which is why we have avoided direct exposure to companies that have very little control over the product they produce.

Bottom Line: commodities are rising due to strong demand and, more recently, supply disruptions. Higher prices are elevating consumer prices, but there are indications that current levels are unsustainable, which would be a positive development for equity markets and negative for commodity stocks.

At this point, we don't think so. During the March 16 press conference, Federal Reserve head J. Powell framed inflation as "running at levels that are well above what would be consistent with 2% inflation, our goal overtime", but an upward price spiral that "become[s] entrenched in the system, we don't see that. We can see, for example, in some sectors that got very high wage increases early on, those wage increases looked like they may have slowed down to a normal level…"

This isn't to suggest that rates should remain near zero. Consumer demand for goods and services is strong and warrants rates to move higher, but we believe the pace of rate increase will be closely tied to the inflation outlook. While we believe inflation has peaked, it will remain elevated longer than anticipated. Nonetheless, we point to port congestion clearing, a potential peak in commodity prices amid peace talks, and long-term inflation expectations remain well-anchored as reasons to believe inflation will moderate later this year.

So, yes, rates are clearly moving higher. We were somewhat surprised by the equity market's indifference to the Federal Reserve’s potential to increase its key lending rate by 50 bps at its next meeting. But, as is typically the case, market participants readjust to the reality of a higher rate environment.

We will save the discussion about the shape of the yield curve for another day, but in short, the significant move in government bond yields has introduced a new risk to the outlook, which we did not believe was possible just three months ago: a US recession occurring within the next 12-24 months.

You may hear that our central banks are behind the curve, but what does this mean? Essentially, bond yields have already moved substantially higher, anticipating the central banks to hike their key lending rate.

Remember that both the Bank of Canada and US Federal Reserve have only hiked 25 rates bps, yet the table below illustrates that bond yields have moved well ahead of the central banks' move off zero.

Bond Yields Well Ahead of the Fed

Yield curves and government bond markets are perhaps esoteric topics, but a more straightforward and meaningful question many may be asking is how high will rates go (in central bank language, where is the neutral rate, the policy rate that keeps the economy at full employment and stable inflation)?

From a historical standpoint, we can reference the prior peak in the Fed or BoC rate. Over the past three decades, the new hiking cycle has not surpassed previous peaks.

The reason for this steady stepdown in rates is a conversation we can save for another newsletter. Suffice to say, in this case, Canadian short-term rates are unlikely to exceed much past 1.75% before tipping the economy into recession. In the US, the Fed estimates the neutral overnight rate to be around 2.5%.

So, if you're at a dinner party, and someone says rates are going to skyrocket like in the ‘80s, you can say it's possible but highly improbable given what we know today. 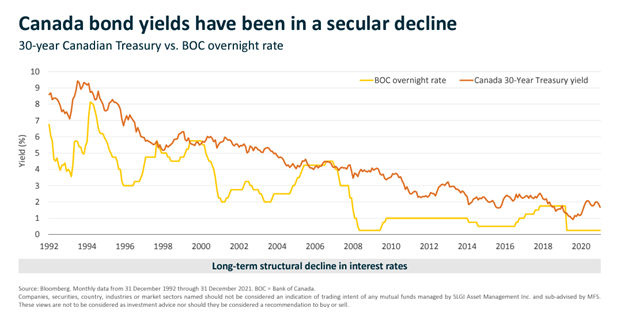 Bottom Line: central banks are playing catchup to the move in bond yields; short-term interest rates are moving higher, but there is a limit to how high rates can go. Recession risks are a factor we now need to be considering.

We have been defensively positioned for much of 2022, which has limited downside during this period of volatility. We continue to monitor the risks but see signs that the worst has passed for equity investors. We are incrementally more positive on the near-term outlook and have been adding to existing positions.

Risk allocation. Technology has been one of the hardest-hit sectors as the valuation multiple resets lower. While investors may no longer be willing to pay a hefty premium for growth stocks, the underlying fundamentals remain robust with a solid ability to grow revenue, earnings and cash flow.

Defensive allocation. We increased our allocation to individual positions within health care, utilities, and consumer staples. We also began allocating to our fixed income sleeve, given the significant move in bond prices.

We leverage a handful of third-party managers across the portfolios to gain exposure to particular asset classes, investment styles, and geographical regions we could not otherwise invest in. The key to selecting these managers is to ensure they add value and diversify risk.

We implemented a series of switch trades among our equity and fixed-income managers upon our quarterly review. By exiting a few positions, we allocated to our high conviction managers.

If you'd like more details/rationale on specific trades during the quarter, please feel free to contact us by clicking here.

Markets are preparing for a steady increase in the fed funds rate past the "neutral" threshold. 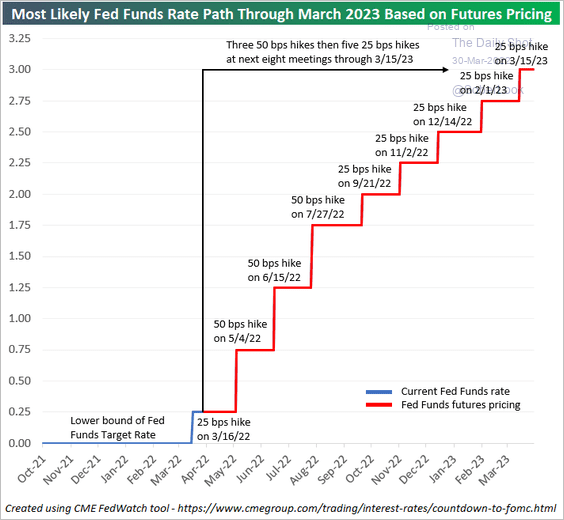 But, if supply chain issues can be resolved, the path to higher rates may prove overly aggressive. One potential sign of supply chain inflation may ease as the number of container ships waiting at the Port of LA, and Long Beach has been declining. 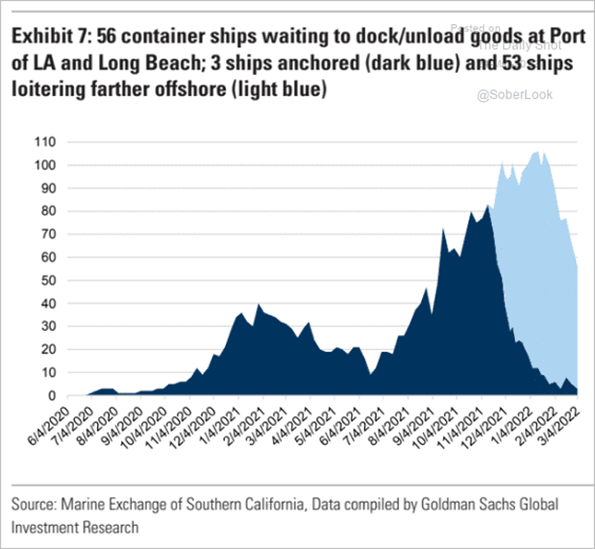 Brent oil, the international benchmark, trades at a significant premium due to geopolitical risks. 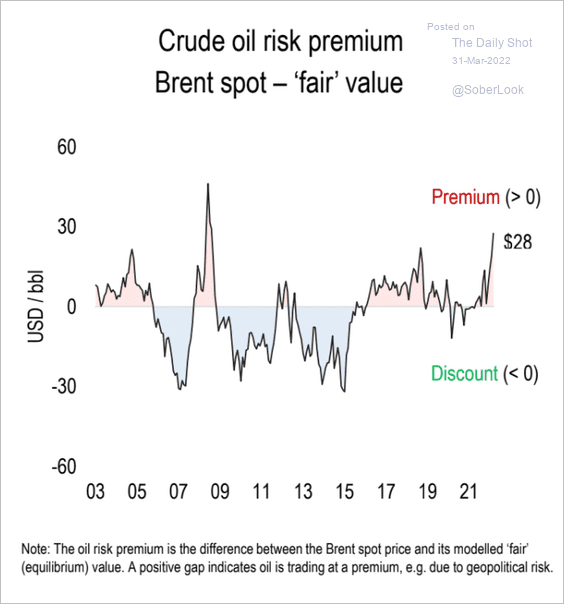 The Canadian dollar has decoupled from the rise in commodity prices. 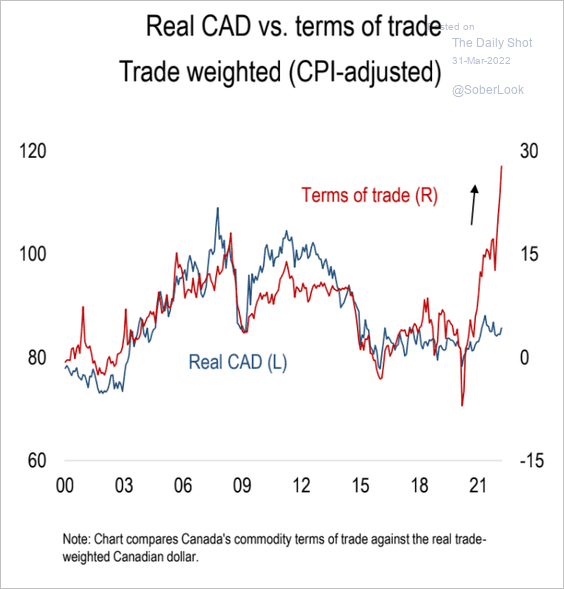 The Russia-Ukraine conflict has added 2 hours to flights from New York to Hong Kong. 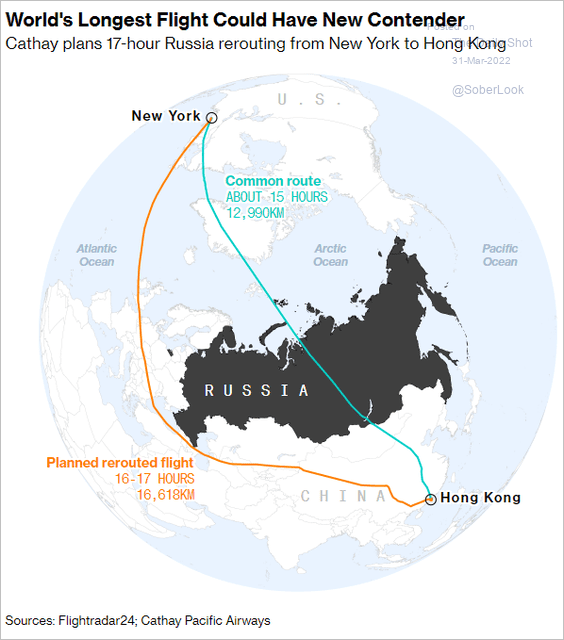 What will US consumers do with their tax refunds? 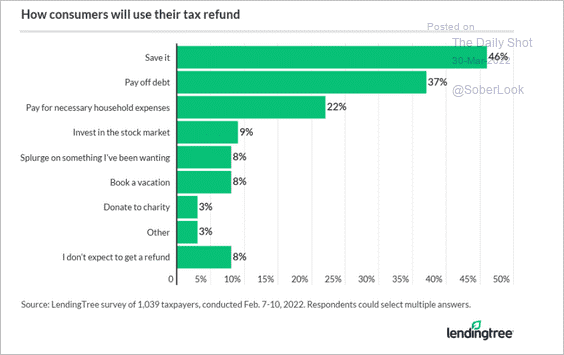 Geopolitical events increase the uncertainty surrounding the outlook. At the webinar, we discussed how we have been managing the increased volatility experienced, how the economic outlook has evolved, and the implication for equities.