Green Day's Wake Me Up When September Ends was released in June 2005. Twelve months later, the Fed fund rate peaked. Finding where short-term interest rates will eventually peak is the key to the market. Perhaps Green Day offers the answer sometime mid-next year.

There was no shortage of data to inform the potential path for interest rates. All eyes were on global central banks as nine rate decisions were announced, the climax being the U.S. Fed's rate decision on Wednesday.

Ahead of the meets, the bulls and bears jostled for position resulting in a volatile month.

September has historically been volatile and often the weakest, producing an average return of -1.03 per cent. So, September is living up to its reputation. You can caulk this month's volatility up to the usual suspect: inflation. 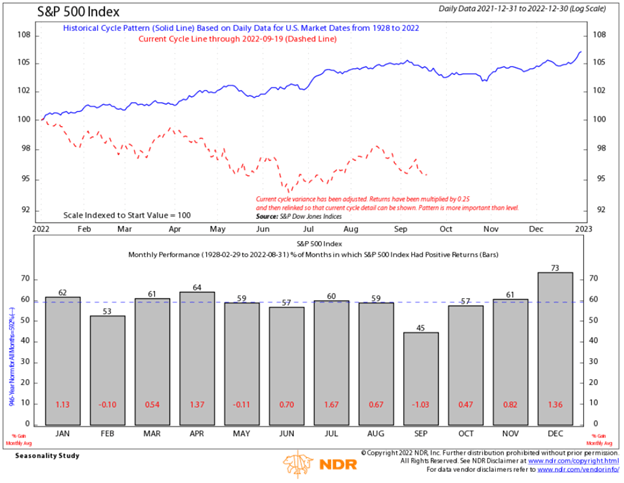 Cooling, but Not Cool Enough

Ahead of the all-important inflation data released on September 13th, traders aggressively positioned for a significant dip in the price index, so when the report failed to deliver, traders were caught offside.

As these aggressive bets were unwound, the S&P 500 slipped 4.3 per cent, its largest daily percentage move since March 20, 2020. And just like that, the positive momentum built over the prior six trading days was largely erased.

The disappointing inflation print pushed the September Fed rate hike expectation to a full one per cent. The day after, the producer price index (PPI) pointed to an easing in inflationary pressures. Expectations edged back to a 75-bps hike, which the Fed delivered.

Ultimately, markets have struggled this year because we don't know where and when the Fed funds rate will peak.

The peak in rates can only be determined once we have explicit evidence inflation is easing and will eventually return toward target.

The dots on the chart below illustrate each regional Fed head's year-end interest rate forecast, and the yellow highlighted area is the current Fed funds rate. 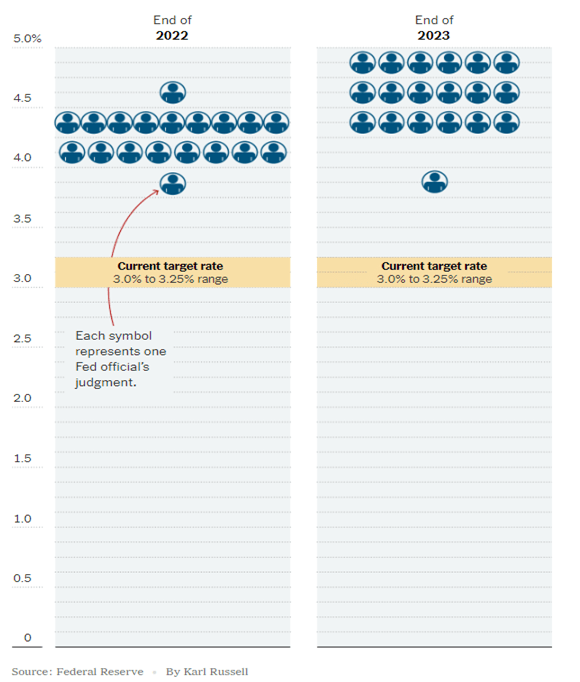 Rate hikes take time to work their way through the economy. The Fed has always said it wanted to frontload the rate hikes to fight inflation and see how the plan is working.

And frontload they did. In six months, the Fed funds rate has jumped 300 bps! The last hiking cycle started in 2015 and took four years and a cumulative 225 bps of increases. In 2004, we saw 425 bps over two years.

We're now at the point where the first couple of hikes this year will begin impacting economic activity and inflation, which could be the positive catalyst we need.

It's very rare the herd gets it right. The contrarian in us is screaming buy. 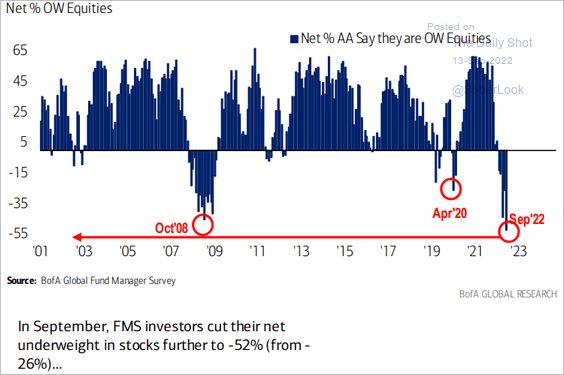 Another way to look at the extreme sentiment is the put/call premium that has spiked off the charts.

As illustrated in the chart below, there are often significant premiums on puts near market lows.

Investor Paying Up for Protection 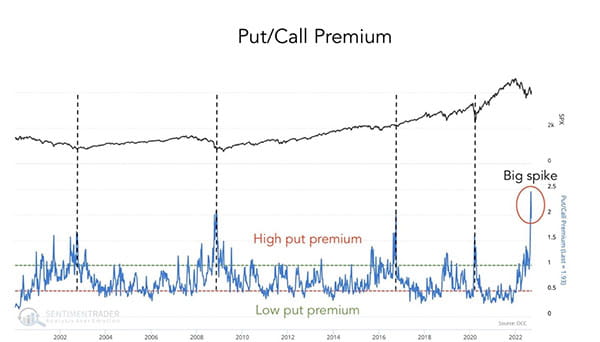 Ultimately, no one knows what the future holds, including the bulls and bears among us. This has always been the case, which is why diversification is the only real key to success in long-term investing.

However, when everyone is betting on one side, and there is the slightest glimmer of hope for brighter days, it can unleash a powerful counter-trend.

The ingredients are there. We just need inflation to cooperate.

By investing in solid businesses, in varying degrees, we're looking for singles and doubles, not home runs in the Cadence portfolios. This is even more true today, given the economic backdrop's unprecedented, complex, and sometimes contradictory nature.

We have patiently dripped the portfolio's cash into the market – the cash position now hovers around 10 per cent. We have done some profit-taking (yes, you can still make money in these challenging markets) to make way for two new high-quality companies and a new fixed-income manager.

To fund the purchases, we took profit on the positions below but continue to maintain a less weighting in each:

Navigating the compressed rate hiking cycle and elevated inflation has created one of the most challenging investment environments in our careers.

For the first time in nearly 40 years, we also don't have the Fed acting as a natural tailwind for risk assets. Understanding and incorporating this with one's investment strategy will be the key to success.

While challenges persist, we remain solidly steadfast in our goal of achieving the outcome you expect.

It's been decades since we've seen such a sharp increase in the two-year Treasury yield. 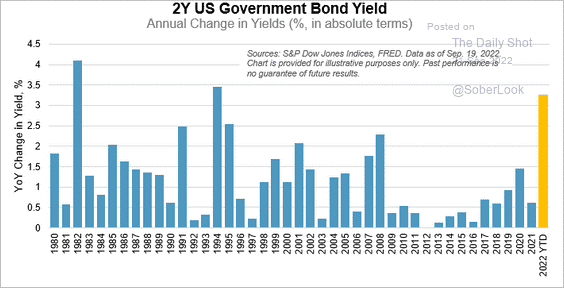 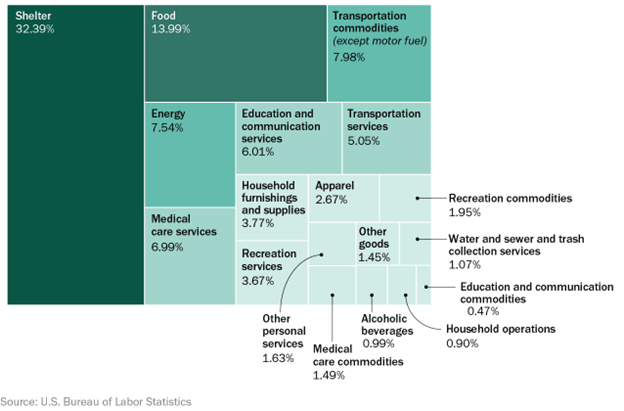 Where will the S&P 500 be a year from now? Here is a survey from Evercore ISI. 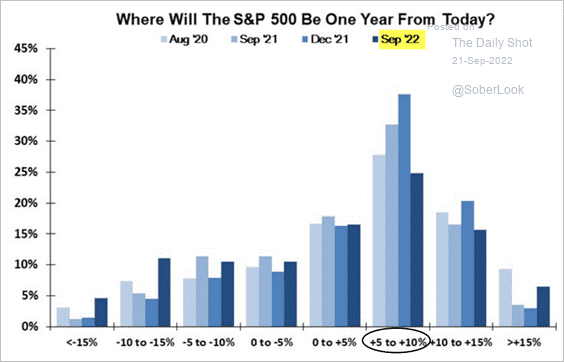 The Canadian housing market is cooling, which is helping to ease inflationary pressures. 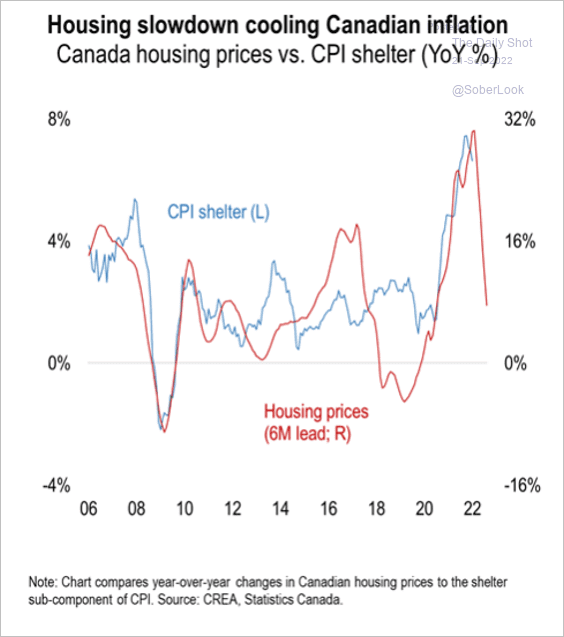