Chuck Berry or AC/DC? It is a tough call. Do you go with the 1957 classic rock-and-roll anthem or the cover by one of the best rock bands in history? Have a listen and let us know.

Regardless, school is back, and summer is officially over. It's time to get back at it, but we won't fault you if you focus more on a little R&R than agonizing over the latest economic release. So let's take a moment to reflect on the past couple of months.

Investment sentiment and positioning were overly negative in June, making an oversold bounce seem inevitable. The "less bad" than expected corporate earnings and forward guidance were the spark that lit the relief rally to take hold.

However, the market looked slightly extended as we entered August, and a minor pullback was expected.

Expectations and reality are often two mutually exclusive concepts. The minor pullback morphed into the S&P 500, retreating over half of the summer gains, with most of the damage occurring in the late days of summer when most of Wall Street was enjoying the beach house.

The trigger for the low-volume summer swoon was comments made by U.S. Fed Chair Jerome Powell at the Jackson Hole Economic Symposium. In fact, the post-Jackson-Hole one-week selloff was the second most severe. 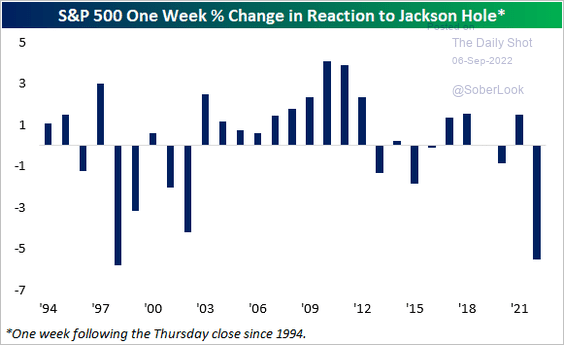 The Fed aims to achieve a “soft landing”, but perhaps the market was spooked by language like the process of getting inflation to target will "bring some pain to households and businesses". We're all fully aware a soft landing means economic conditions will "soften", so again, the comments didn't seem out of line.

Or perhaps Powell's comment that another outsized rate hike "could" be appropriate in September. Yet, before these, we knew the Fed was on track to raise rates by 50-75 bps on September 21, bringing the policy rate to 3-3.25 per cent. Another 25-50 bps hike is anticipated by year end before the Fed considers a pause. Consensus year-end Fed Fund rate estimate has sat at 3.5 per cent since July.

Powell noted that policy rates would need to be tight "for some time" and warned against a premature loosening. The Fed aims to bring inflation back to target and avoid a buildup of inflation expectations that necessitated a painful adjustment in the 1980s. Yup, the message received to better tame inflation now than jamming on the brakes later.

Market participants were clearly looking for a dovish pivot, however misguided.

While equity markets were weak in August, there were welcome economic developments (see Charts of Interest for supporting charts). These developments include:

Besides some positive economic developments, equity market internals suggest the near-term bottom occurred this summer. Most notably was an improvement in market breadth during the summer advance.

Market breadth is simply the number of stocks participating. The greater the participation, the greater the confirmation of a trend. The opposite would be narrow breadth, which indicates only a handful of stocks are doing all the heavy lifting (you can think back to the Nortel days when the stock made up over 30 per cent of the TSX – where Nortel went, so did the market).

We can measure breadth by the number of stocks trading above a specific moving average. The rally off the summer low saw 91 per cent of all S&P 500 members trade above their 50-day moving average, indicative of broad participation. 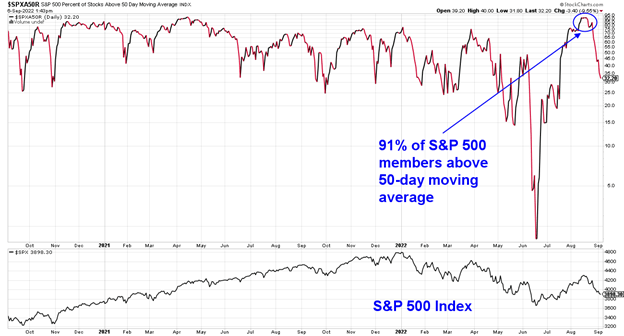 Where do we go from here? We're in unprecedented times, which makes historical references untenable. Nonetheless, history suggests the market low may have been achieved in June.

Considering market data since the 1940s, if the S&P 500 retraces more than 50 per cent of the drop (as happened from the January record high to the June bear-market lows to the August high), the market has never gone on to make a lower low.

Indeed, as the table below from CFRA's Sam Stovall shows, the S&P has never set a lower low in any of the 13 post-World War II bear markets after recovering 50 per cent of its peak-to-trough decline. 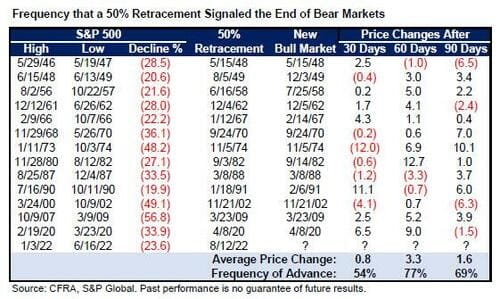 Geopolitical events and/or the Fed's tightening cycle could tip the scales and send markets into uncharted territory. But based on the things we can forecast – inflation, rates, earnings and the economy – our bias is that history can prevail in the near term.

A Blast from the Past

We recall a chart from our previous newsletter outlining two possible market outcomes depending on whether the U.S. economy is heading into a recession.

If we avoid a recession, the chart below illustrates the market's historical experience (black line), while the blue line shows how the market may perform if we enter a recession.

As you can see, we're at a bit of a directional crossroads. The catalyst for the ultimate direction will culminate as we receive another inflation report, earnings pre-announcements, guidance and Q3 earnings season. 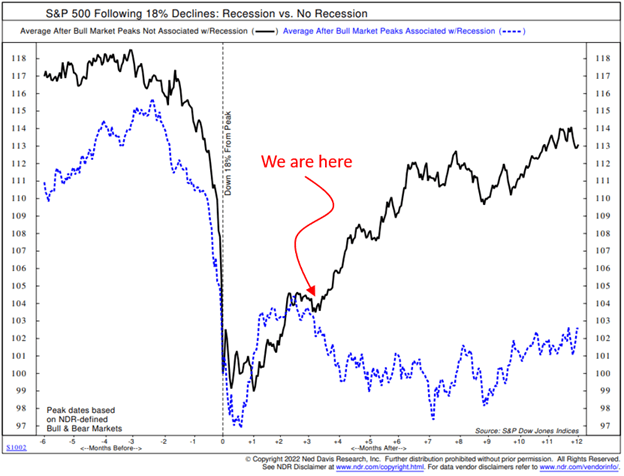 Ultimately, no one knows what the future holds, including the bulls and bears among us. This has always been the case, which is why diversification is the only real key to success in long-term investing.

By investing in solid businesses, in varying degrees, we're looking for singles and doubles, not home runs in the Cadence portfolios. This is even more true today, given the economic backdrop's unprecedented, complex, and sometimes contradictory nature.

In a positive development for the Fed, more Americans re-entered the labour force last month. 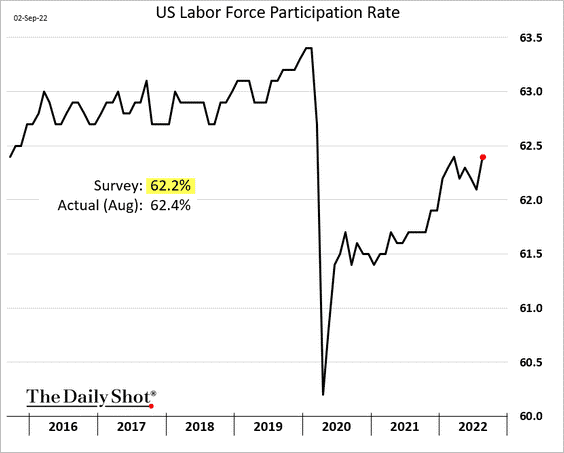 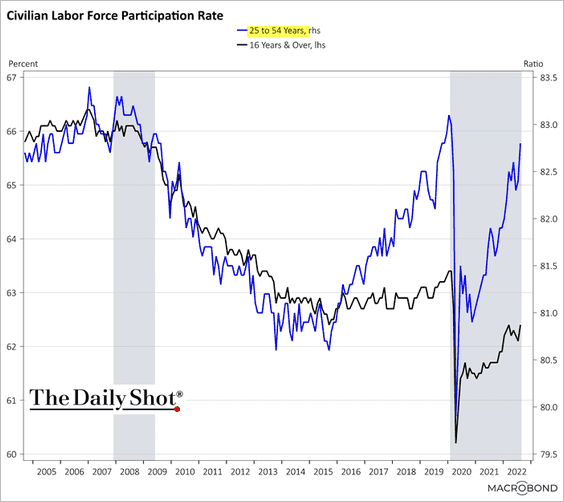 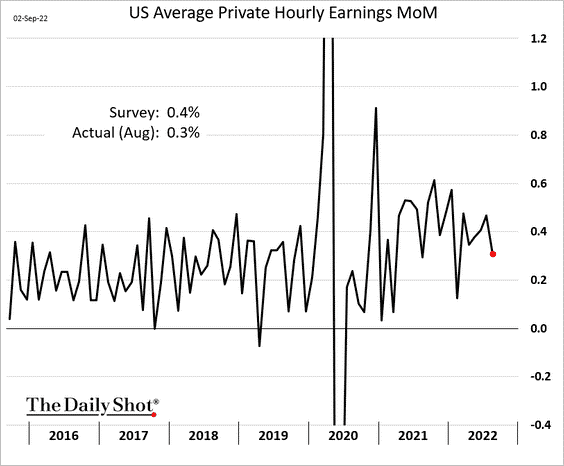 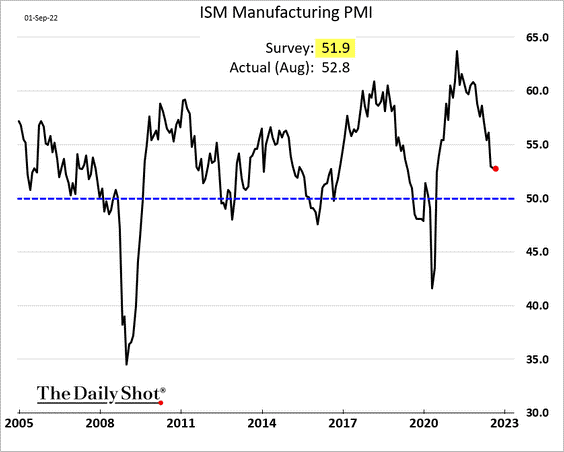 Manufacturing price pressures eased, another sign consumer prices may have peaked in July. 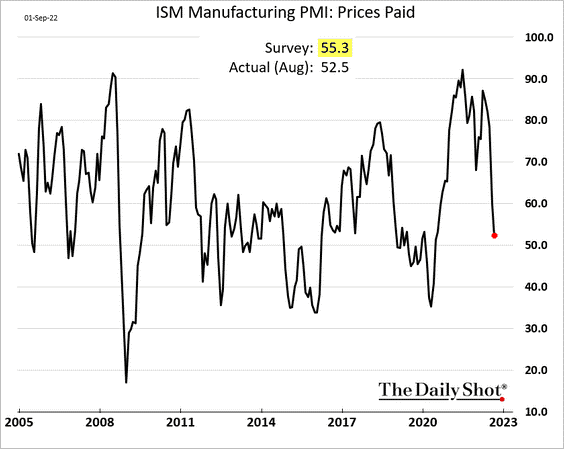 Ready, set, go. The race to return to the moon is on. In the coming weeks, NASA will launch Artemis I as it attempts to return humans to the lunar surface this decade.